There is great news for all cricket lovers who live in Pakistan because cricket has been banned in Pakistan after the incident of firing the Sri Lankan Cricket team. Pakistani Cricket fans couldn’t watch cricket on the grounds/stadiums of Pakistan as after that event UAE was declared the home ground for a Pakistani cricket team. Before the T20 World Cup 2022, Pakistan will host 7 thrilling matches against England. Pakistan Cricket Board release all the schedule of the T20 series England tour to Pakistan. England’s team come to Pakistan after 17 years to play the matches.

It is a big opportunity for the Pakistani team to build their reputation in the world of cricket. England is a strong team and ranks at the top in limited overs format. So get the all information about the England tour to Pakistan for the T20 series.

England Cricket team is very strong because England team has a very good combination of players. They have a very nice combination of fast and spin blowers as they have legends like James Anderson with having 600 Test wickets, playing such great bowlers is not easy, and they have batsman like Ben Stroke who has made England proud by grabbing them victory against Australia. In the T20 format, England ranks at 2nd no. No dought Pakistan has also a strong team.

But performance in the T20 England is better than Pakistan’s. A total of 15 matches were played between Pakistan & England. In these matches, England won 10 and Pakistan win only four matches. Now it is a better opportunity for Pakistan to do its best to get a high ranking in the T20 records as Pakistan is right now having the 4th team in T20 Cricket Rankings and England team is ranking at 2nd position in T20.

England will come to Pakistan for the T20 series match and all the fans are excited to watch these matches. Jos Buttler led the England team and Babar Azam is the captain of the Pakistan team. This cricket series will be good for both teams before the T20 World Cup 2022.  Both teams will play a total of 7 T20 matches against each other in two venues in Pakistan.

Pakistan Cricket Board confirmed the schedule for the England tour to Pakistan for T20 series matches. 1st match will go to start between both teams on 22 September 2022. England and Pak will play a total of 7 matches in Karachi and Lahore stadiums.

1st Four matches will play in the Karachi national stadium and the remaining 3 will host by Lahore Gadaffi stadium. The time, date, and venue for all matches are mentioned in the schedule. You can check her schedule for both teams’ matches and all matches will most rivalry matches between both teams.

1st match of Pakistan vs England  Team in T20 Series

All the fans of both teams don’t forget the date of the first match. Because both the teams are strong and have great players to compete with each other.1st match of the T20 series will play on 20 September 2022 on Saturday. Fans in Pakistan can watch the match at a local time at 7:30 PM. The venue for the match will National Stadium Karachi.

2nd match of Pakistan vs England  Team in T20 Series

Pakistan team play 2nd match against England according to schedule.  The second match will play on 22 September 2022 on Saturday. England residents and fans can watch the match according to the Pakistan local time at 7:30 PM. Both teams play the second match in Karachi Stadium.

3rd match of Pakistan vs England  Team in T20 Series

England and Pakistan play their 3rd T20 series match on 23 September 2022 on Sunday. All the fans can watch the match according to the local time at 7:30 PM. The venue will same for the 3rd match. Karachi National Stadium will host the 3rd match.

4th match of Pakistan vs England  Team in T20 Series

5th match of Pakistan vs England  Team in T20 Series

England team play the 5th match against Pakistan on 28 September 2022 on Thursday. both teams play the match according to the local time in Pakistan at 7;30 PM. This match will host the stadium of Lahore, Ghaddafi Stadium.

6th match of Pakistan vs England  Team in T20 Series

5th match of the T20 series will play according to the schedule. Pakistan will play against England 6th match on 30 September 2022 on Saturday. The match will start at 7:30 PM Pakistan local time. Ghaddafi Stadium will host the thrilling match of both teams.

7th match of Pakistan vs England  Team in T20 Series

The last match of the T20 series between England and Pakistan will play on 2 October 2022 on Monday. Cricket lovers of both teams can watch the match according to the local timing of Pakistan at 7:30 PM. Lahore Ghaddafi Stadium will host the match of England vs Pak. 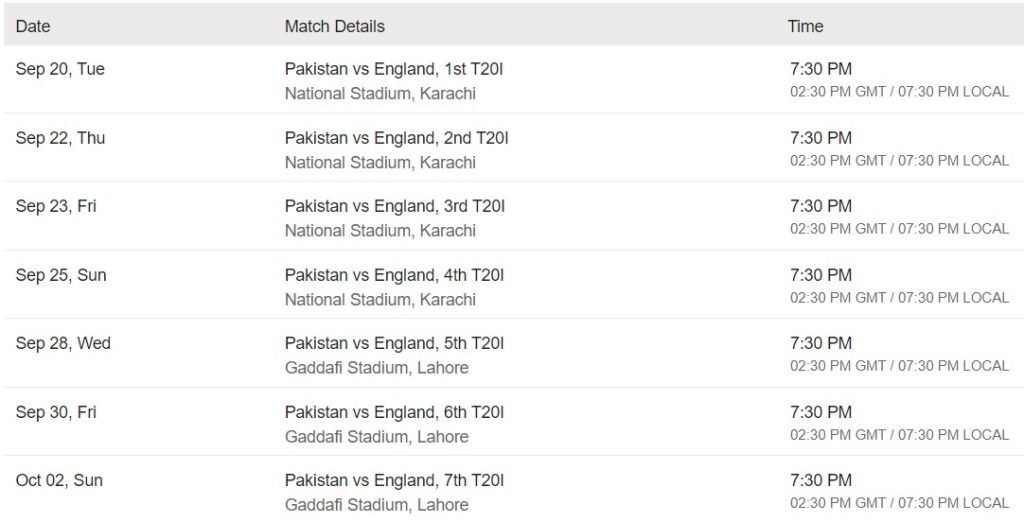 It will be the most exciting series between England and Pakistan. Because this time Pakistan will host the series tour and England will come to Pakistan after 17 years. First time in 2005 Pakistan was host the T20 tour series. All the fans who live in Pakistan and England are very excited to watch the series.

But some of them can not watch the live match on TV screens. Fans who have a craze for cricket can not leave his/her favorite tournament or series. They found different ways to watch it. But everybody doesn’t know how they can get updates on cricket. Don’t worry we are here to solve your problem. Two websites give you the benefit to get updated.

These are free websites to watch the live score. Everybody at any place can watch the ball-by-ball live score on this website. You are right these are Cricbuzz and ESPN Cricinfo. Both websites provide not only live scores but also schedules, and news related to cricket, players, and team stats. Download one of them on your Mobile, PC, or Laptop. Connect it to the internet and enjoy the live score at any place.

These days watching live streaming through websites become a trend.  And developers made new website day by day for the convenience of sports fans. All the websites are not free and best. Because some of them get a heavy subscription and don’t provide good quality live matches.

People are crazy about the Cricket game therefore they find different ways to watch live streams on online platforms. A lot of websites provide the live stream but some are the best. These all are high quality and provide live matches in HD form. Some of them also provide extra service if you find any trouble with it you can change the server.

These websites run on all devices and at any place. Just download the websites and connect the internet to your device. Select the live cricket match of the England tour to Pakistan for the T20 series and enjoy it with your friends.

Pakistan Cricket Board announced the channels which will broadcast live matches on TV screens. In Pakistan, all the fans can watch the T20 Series England vs Pakistan on PTV Sports. It is the official channel of Pakistan and provides the live telecast of all 7 matches of the series. Cricket lovers can also watch this series on Ten Sports and GEO Sports. Ten Sports is an amazing sports channel where you can watch all sports live broadcasts.

Ten Sports is the Dubai official channel and acquired the telecast rights for live cricket in Pakistan. Geo Sports also telecast the live England vs Pak series matches. All Pakistani or England team geeks who live in the UK can watch the live series on  Sky Sports. It is the official paid television channel of the UK. If you live in the United Kingd0m you need to buy Sky Sports Subscription to watch the series Pak vs England.

If you are a mobile user and want to watch the live stream on your Smartphone then Daraz is the best option for you in Pakistan. Daraz is the E-Commerce platform in Pakistan but now provides also live streaming. Daraz Live brings for all the fans not only live matches but also new related to cricket and other sports.