Fast bowling is a hard art to master and some famous bowlers have shown their capability to bowl logically at upwards of 90 miles per hour. There is no contest to the success of a ball flying at 150km/h the faster ball is bowled by a great bowler.

It is a tough and training game, which is why the sight of stumps clang is of use to the eye. In this article, we discuss the fastest ball in cricket history bowled by a great bowler. 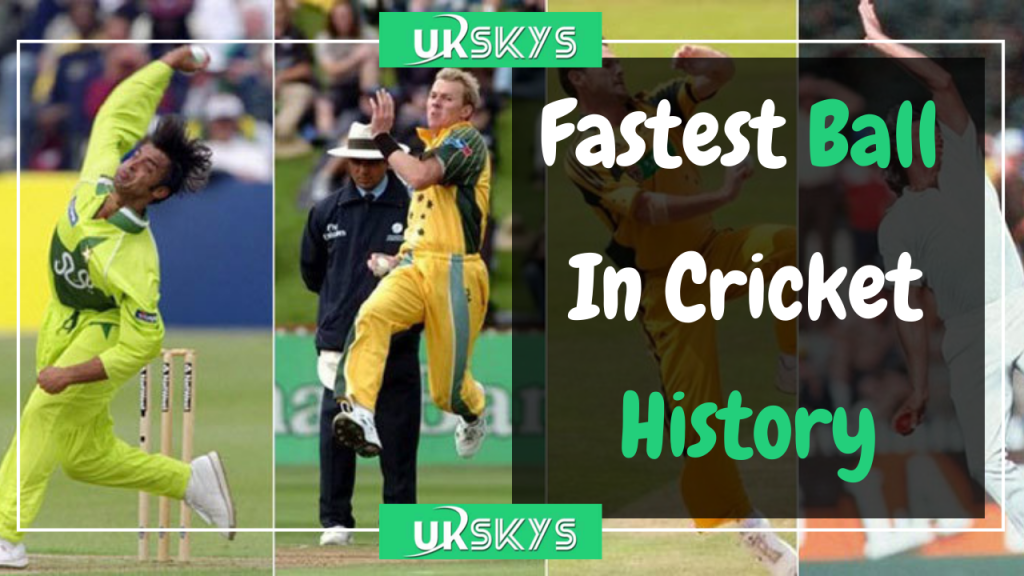 We list out the names of bowlers who delivered the fastest ball in cricket history.

All know cricket gives to the world many big names and stars. Shoaib Akhter is one of them who made fear in the heart of batsmen with the panic of his bowling. Great batsmen of the cricket world Brain Lara, Sachin Tendulkar, and Rick Ponding feel fear to face the Shoaib bowling.

Shoaib Akhter is a former Pakistani cricketer, who played all three formats of cricket for fourteen years. Akhter delivered the fastest ball in cricket history with 161.3 km/h against England in the 2003 cricket World Cup in a pool match. Shoaib Akhter is known as “ Rawalpindi Express” which is a tribute to his home- town and fast bowling.

You are reading about he fastest ball in cricket history. But do you know who made the fastest century in T20 cricket? He is the first bowler who breaks the 100km/h fence as well which he did two times in his career. Shoaib Akhter made his Test Debut in November 1997 as an opening fast bowler and first ODI international three months later. Akhter has been involved in many arguments during his career, even accused of not being a team player.

Shoaib Akhter is the fastest cricket bowler in History

But was also complimented for remarkably impacting cricket in Pakistan’s approval. Akhter was sent home during a test match series in 2005 in Australia for the attempt at bad behavior. A year he was involved in a drug scandal after testing positive for the performance-increasing matter nandrolone.

In October 2008, the Lahore High Court Pakistan suspended the five-year ban and Akhter was selected in the 15 man squad for the T20 Tournament in Canada. Akhter retired from international cricket after the 2011 World Cup.

Brett Lee was the fastest Australian bowler and ranked 2nd in the world of cricket as the fastest bowler. He made a record of the fastest ball in cricket history with 161.1 km/h in the first over of the New Zealand innings at Napier. Brett Lee bowled a consistently menacing spell early on and New Zealand, who had already seemed at a big defeat, was fumbled against some explosion.

Micheal Kasprowicz joined the demolition act and New Zealand did not even menace to come close. Ricky Pointing and Adam Gilchrist had ended the games as a contest by the halfway stage and it was just a matter of time before the whitewash was completed.

New Zealand was completed battered ahead of the Test series, starting in Christchurch, while Australia was spoilt for choice concerning which of the three fast bowlers to pick. Brett Lee’s fury, Kasprowicz’s contrast Glenn McGrath’s steady accuracy, and Jason Gillespie’s lethal way-a heady mix for an unbeatable team.

He impressed on his test debut against India in 1999, picking up 7 wickets, including five wickets haul in the first innings. The stat him the first Australian bowler since Denis Lilee to take a fifer on debut. Brett Lee plays an important role in the win of the ODI World Cup in 2003 and 2007.

He was the first cricket player to take a hat-trick in T20 international cricket. In a wonderful career of 13 years, Brett Lee takes 700 international wickets for Australia. He takes 310 Test wickets, 280 ODI wickets, and 487 first-class wickets.

Shaun Tait is known for his erratic bowling but he is not famous for Australia at the international level. He is one of the quickest bowlers in the world, but his best was seen only in short formats for Australia. A butler bowler with strong shoulder action, his body found the workload too hard in the long-form and played only three Tests.

He has done first-class cricket by the age of 25. As a late addition to Australia’s ODI squad in 2010, he unleashed a ball against England that registered 161. km/h, the  2nd fastest ball in cricket history all time. With a muscular and untreated way that seemed to invite pain, Tait played a major role in Australia’s World Cup in the Caribbean in 2007, where he claimed 23 wickets.

But that was the last international match played by Shaun Tait before he retired from all formats of games due to his injury issues. The right-arm pacer even breached the 100mk/h fence against Pakistan in the T20s game in his career. He could only play three tests and 32 ODIs of Australia at the international level.

Jeff Thomson was the fastest bowler of his career. He was a monster of cricketing nature and he was an extraordinary athlete with a flexible and elasticity of frame enabling him to deliver the ball in a way. Which is not unique but certainly very rare and might be effective.

He delivered his fastball in cricket history at a speed of 160.6 km/h against West Indies at Perth in 1975. Thomson would make for the most fearsome fast bowling during 1974-1975. He took 200 wickets in Test matches and 55 wickets in ODI at the international level.

Jeff took 675 wickets in first-class cricket playing in Middlesex and New South Wales. He was one of the fastest bowlers to have played Test Cricket. He delivered the fastest ball in cricket history in the cricket career. With an unusual slinging action and an aggressive approach, he was a fearsome sight to the batsman.

He debuts against Pakistan in 1972-1973 but was hampered by a broken bone in his foot which he hid from the selector was profitless.  In 1974-1975, and forming a partnership with Dennis Lillee, he scared the England tourists with a compatible spell of extreme fast bowling taking 33 wickets in the series.

His action put major stress on his body, particularly his right shoulder and he was seldom fit enough to reach those peaks again. He adapted his method, depending less on pure pace, and more on an excellent cutter, and staring and swing.

He was always capable of discharging a very fast bouncer that would skid and followed by batsmen from only just short of a length. A capable fielder, and a lower-order batsman who could hit, he was frequently heard on radio commentary during the 1997 Ashes series.

Mitchell Strac is one of the fastest bowlers who delivered the fastest ball in cricket history with 160.4 km/h in the Test match against New Zealand at Perth. The Australian pacer was the highest wicket-taker in two consecutive 50s over World Cup in 2015 and 2019. He has taken 244 wickets in 57 test matches and 175 wickets in ODIs and 28 in T20s.

He is the fastest new owner of the fastest test cricket, but Australian paceman Mitchell Starc will have to wait a bit longer before being accepted into the 100-mile club. And it also fell just short of the 100-mile mark, with the change leaving it at 99.6 mph. But it was the fastest ever set down delivery in Test Cricket, adding to Stars’ upwards standing in the game.

It came during a threatening charm that stimulated new life into what had otherwise been a dull WACA Test. Mitchel Starc frequently bowled in the 150s against the Kiwis. His brilliant pace even cut the bat of Brendon McCullum.

Brendon was favored the flying mass did not divert onto his stumps. It seemed Starc was even bowling too fastly for his partners at times. The 25-year-old left-hander could only look on in anger when Nathan Lyon put down a catch at third slip when Brendon McCullum was on 5.

So fast was the pace that Lyon did not even get a chance to put his hand in the right place. Then in Starc,s next over Mitch Marsh put down a hard catch to his left at the pass, giving Taylor a pardon on 137. Shaun tait(161.1kph) and Brett Lee (161.1kph) are other Australian bowlers who have been registered at more than 160 km/h. But with time on his side, Starc is on the way to becoming faster than both of them.

Andy Robert kept his emotions in check. He was an intelligent cricketer with a prolific brain, plotting and planning the downfall of batsmen as if it were a military campaign. The modern West Indies game is based on the heavy artillery of the fast bowler.

With the power of great pair of shoulders, here was a bowler whose pace came from the timing. He was also part of the West Indies World Cup squad from 1975 to 1979. He takes 202 wickets in 47 test matches, 87 wickets in 56 ODI matches in international level cricket.

Fidel Edward is the most Thrillist fast bowler of West Indies, explored by Brain Lara. He delivered the fastest ball in cricket history with 157.7 kph against South Africa in 2003 at international level cricket. He added five in his first overseas Test and six in his first ODI international matches.

At the ODI stage, he made the highest runs in 2006 but drop towards the year after failing to win Champion Trophy. He was not needed at World Cup but on his ODI callback, his explosion through England he made five for 45 at Lord’s. He picks up a personal discovery in the 2nd test against New Zealand on the West Indies tour taking 7/87.

The best achievement of his career was to pass 100 dismissals. The last of his 55 Tests came against Bangladesh in 2012. He delivered the fastest ball in cricket history in his career.

His attempt in 2015 was proved beneficial, by collecting 45 Championship wickets at 20.8 in eight matches. He was the prime power in his first break-up survival, taking ten wickets in a first-class match for only the 2nd in his career. He takes 165 wickets in 55 tests and 60 wickets in one-day international cricket.

A broken ankle hurt in an early-match warm-up at Headingly demolished his 2016 season series as Hants only break out consign because Durham was relegated after a financial bale-out, but a useful season of the year later again helped Hants runaway on the final day. On his day he could unmoving be an amazing sight.