The batsman is like a runs machine who hits the most runs in the cricket game. Here we are going to share detail about BPL Best Batsman. In Bangladesh T20 domestic league many players hit the highest score. But some batsmen do extraordinary work with their batting line and made many records for their teams. Hits and boundaries of batsmen forced the audience to come into the stadiums. We try our best to keep updating you with every news about the Bangladesh league, So, connect with us to know more information about BPL. 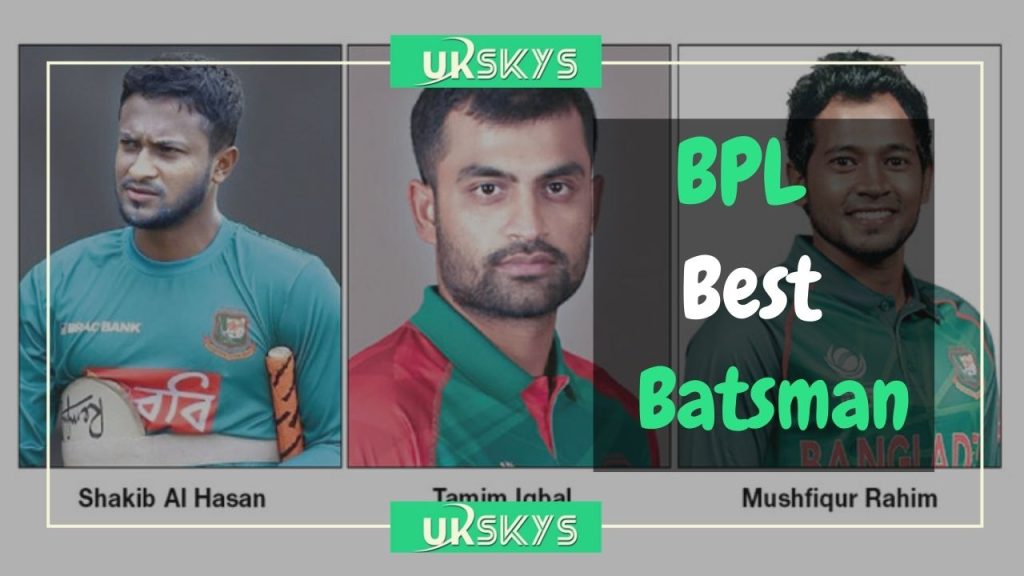 The purpose of BCB is to launch its league to promote new talent for Bangladesh cricket. This league gives the chance to both bowlers and batsmen to make a special place in the cricket world. Many foreign batsmen get success from the platform of BPL. When any cricket series play the hope of fans are belong to the batsman.

Because batsman is the only person who has the skill to make most runs for his team. Outstanding batting of batsmen increases the interest of fans to watch their hard-hitting batting. Here we list out the details of some dangerous batsmen who can make the most runs in any match.

Tamim Iqbal is a part of Bangladesh cricket and recently he captained the International team in One day International. He is the only batsman on the Bangladesh team who scored centuries in all three formats. Tamim plays for the BPL and has a record to make the highest runs in BPL history. He made his first debut in BPL in 2012 against Dhaka Dynamites. He was the icon player of the Chittagong Kings team and in the first edition of the league, he score only 8 runs because he play only 2 innings.

Duronto Rajshahi’ team bought him in the 2nd season where he score 244 runs in 9 innings. He made a record of leading scorer and hit 3 fifties. He gets an award for ” Man of the series” in the 2nd season of BPL. Chittagong Vikings bought Tamim Iqbal and he make the highest score of 298 runs with an average of 37.25. Again in 2016, he become the leading scorer making 476 runs in 13 innings. Tamim makes records for every team with the highest score. Once again in the 5th season, he becomes the leading batsman with the highest score.

He makes 332 runs in 10 innings including 3 fifties. Tamim hit a wonderful century against Dhaka Dynamites 141 on 61 in the final match. He scores 447 runs in 14 innings in the 6th edition of BPL. He became the first cricketer who has chased 2000 runs in Bangladesh Premier League history. In the previous edition, 0f 2022 Minister Dhaka’s team bought the Tamim Iqbal for their team. He scores 396 runs in 13 innings of the tournament. He scores a total of 2628 runs in 8 seasons of the Bangladesh League with an average of 38.34 in 78 innings.

He made his 1st debut for the Duronto Rajshahi team in the first edition of the Bangladesh Premier League. He takes started in with strong batting in the first tournament and make 234 runs in 11 innings. Sylhet Sixer bought him in the 2nd season of the league he makes 440 runs in 13 innings. He became the leading run-scorer of the tournament and get the award for his best performance in the batting line.

He could not play the 2015 season due to some issue, later Barishal Burners bought him and he score 341 runs in 12 innings. His batting average was a fantastic 37.88. He was named as a player of the Chittagong  Vikings Team in the 2018 draft where he hits 426 runs in 13 innings for the Chittagong team. Khulna Tiger franchise bought him for their team in the 2019 season of BPL.

Where he becomes 2nd highest run scorer with 491 runs in a total of 14 matches. He plays with an average of 70.14 and hits four fifties. he also made a record against the Cumilla Warriors team where he hit 98 runs and it is the best knock of his Bangladesh league career. He scores a total of 2525 runs in 90 innings of his BPL career history.

Muhammadullah Riyad is a Bangladesh cricketer and plays at the International and domestic levels. He is a middle-order batsman who plays for the BPL and represents Dhaka Division. He made his first debut for Chittagong King. Chittagong’s team bought Muhammadullah for $110,000.In the first season, he could not play well and made just 180 runs in 10 innings.

In the 2nd season, he makes 233 runs in 12 innings for the Chittagong team. He also took 6 wickets this season. After the suspension of all franchises in 2013 in the next tournament of BPL in 2015 Barishal team bought Muhammadullah Riyad who scored 279 runs with 2 fifties. On the fielding side, he also made a record he took 5 wickets with his bowling line. In 2016 playing for the Khulna Tigers and rise as a leading scorer. He makes 396 runs in 14 innings and took 10 wickets. He scored 312 runs in 12 innings with 2 half centuries.

He is a left-handed batsman and player of Bangladesh cricket. He plays at the domestic level of cricket in Bangladesh. In the first edition, Imrul was bought by the Sylhet team is $50,000. He scored 102 runs in 7 innings of the first tournament. During the 2018 draft of the Bangladesh Premier League, he selects for the Comilla Victorians team where he scored 237 runs in 12 innings. In the next season, the Chattogram team bought him and he scored 376 runs in 15 innings. He made a total of 1970 runs in 91 innings with an average of 24.62.